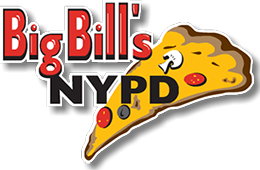 There is always something fun going on or somebody cool hanging around Big Bill's - stop by and see us! 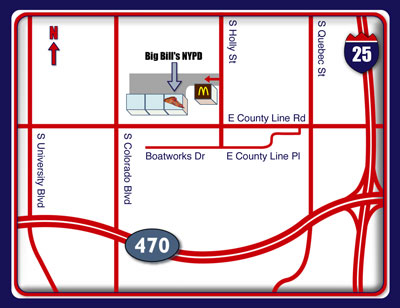 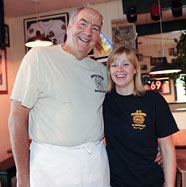 With a nickname that matches his stature and heart, “Big” Bill Ficke has been a fixture in Denver since the mid-1970’s.

Ficke opened Big Bill’s New York Pizza in Centennial, Colorado, in 1995 and it quickly became known for its warm and friendly atmosphere and authentic New York-style pizza and Italian food. One of the hallmarks of Big Bill’s NY Pizza is its annual “9/11 Day of Giving” fundraiser in remembrance of the September 11 attacks, where rather than paying a meal check, diners make a donation and all the proceeds go to cancer research in Colorado. Big Bill’s NY Pizza has raised more than $1.645 million through this fundraiser since 2009.

The opening of Big Bill’s NY Pizza followed a successful 20-year stint as the owner of Fleet Feet, an athletic shoe store Ficke opened after moving to Denver in 1975.

Since he was in high school, basketball has played a key role in Ficke’s life. After growing up in Long Beach, New York, where he enjoyed a successful high school basketball career, Ficke attended Belmont Abbey, where he played basketball under Hall of Fame Coach Al Maguire. During the time he owned Fleet Feet, Ficke also enjoyed success in professional basketball as both a coach and a scout. He was an Assistant Coach with the Denver Nuggets for three seasons under Doug Moe from 1982 through 1985 and the Nuggets made the NBA Playoffs in each season. Following his stint with the Nuggets, Ficke served as the Head Coach with the Continental Basketball Association’s Kansas City Sizzlers. After his time in Kansas City, Ficke then spent 10 years as an Advanced Scout with the NBA’s Indiana Pacers and New Jersey Nets before retiring from pro basketball to open his restaurant.

After the passing of his beloved wife JoAnn who succumbed to lymphoma in 2009, Ficke and his son Dan founded the JoAnn B. Ficke Cancer Foundation. The Foundation now distributes all funds raised through the “9/11 Day of Giving." Ficke also spent four years as President of the Harold & Carole Pump Foundation of Sherman Oaks, California, and he still serves on the Pump Foundation’s Board of Directors.

A veteran of service in the U.S. Air Force, Ficke started his professional career with All State Insurance in White Plains, New York, but his love for basketball and athletics led him to Denver. In the family tradition, Ficke’s son Dan, President of the JoAnn B. Ficke Cancer Foundation, recently became the Head Men's Basketball Coach at Metro State University of Denver after a successful stint in the same position at Belmont Abbey University in Charlotte, N.C., Big Bill's Alma Mater.

Check out the Making Our World Better podcast to learn all about the background of Big Bill's 9/11 Day of Giving!